“Train up a child in the way he should go,
And when he is old he will not depart from it.“

Friends–a simple caveat: this post will contain some grammatical or spelling errors-I’ve done my best to spare you BUT, if I didn’t write this today–right now while the words and memories are particularly persuasive-I would never write it. I could never live with myself if I didn’t say the things that need to be said about my hero, and beloved grandmother, the Honorable Doctor Roslyn Leon.

I don’t know why it’s taken me so long to write this, but in addition all the other upheaval I’m facing, my grandmother Roslyn Leon, AKA Ms. B, passed away on September 14. When people hear that she passed away at the ripe young age of 98, they say well-meaning shit, like-she lived a good life.

That’s not the point. I never expected her to die. She wasn’t supposed to die. Not in the prime of her life!

I can see her looking at me like I was an “eedyat,” scolding me in patois, “You cyan’t expect me to live forevah! C’mon Renee..” Then she’d suck her teeth and I would get pissed at her for being upset with me for having feelings.

I’ve always been emotional; sensitive–to the point of being unrealistic, but I never thought the day would come, when I wouldn’t hear her suck her teeth, or insult my cooking, or give me advice I didn’t want to heed. And- she swore that she would live to be at least 100. If you knew the kind of faith this woman had, you would have believed her too.

Miss B was the matriarch-no the “Don” of our family. I see her sitting back in her arm chair, much like Vito Corleone, while we gathered around waiting for favors to be granted or to have business handled. Instead of kissing the ring, the family and anybody else who wanted business or favors, had to respect the Word. The Holy Bible and prayer were her weapons of choice, well those, and a broken baseball bat she kept by the door, just in case. By the way-Grandma did in fact break that bat on someone.

When Grandma was living at the tenement Brooklyn apartment in Prospect/Lefferts Garden (forgive me but I could have sworn that neighborhood was Flatbush), the neighborhood was rife with crime, unlike the gentrified latte-sipping hipster neighborhood it’s become. I remember staying with her during the summers as a child in the 80’s, riding the number 2 Redbird train from Hoyt Street, downtown Brooklyn to Winthrop Street and I can’t recall seeing any white faces after Bergen Street.

I claimed the broken bat she used to chase drug dealers away from the vestibule of that building she would one day own in addition to properties in Florida and Jamaica. Grandma was no Donald Trump. She wasn’t born rich, white or male, with a silver spoon in her mouth, nor any kind of advantage. In fact, by all intents and purposes she had every disadvantage; she was a single, black immigrant mother who came to Brooklyn with one intention: to build a legacy for her family.

She literally worked her hands and knees to the bone (resulting in the painful knee surgery she’d eventually endure) scrubbing floors, watching dishes, cooking meals- mothering children that weren’t her own and she did it without complaint.

I’ll never forget the time Grandma saw me on my hands and knees scrubbing a stain off her kitchen floor… “Nuh unh, Get up chile!” she said, shaking her head back and forth. “I did that already, you not supposed to…” For as long as I live, that memory remains ingrained and it comes to me a lot lately-especially now that I’m desperately seeking work. You’d think that might have humbled me.

Clearly, I’m no Ivanka, or Donald Trump Jr., but I would be remiss (and doing Grandma an injustice) if I didn’t mention that her hard work paved a way for me. Made my path a little easier and I’ve taken it for granted. I wouldn’t be writing this post, or be able to boast about having two master’s degrees if it wasn’t for her…she payed my tuition and she bought the computer…

PRIDE COMES BEFORE THE FALL…

She literally–forgive me for using the word-but in this case it’s apropos–rolled out the red carpet for me (the carpet in the room she cleared for me was a regal, wine-red color, the same color as blood when I think of it …) when I, the proverbial, prodigal granddaughter returned home, tail between her legs, begging for scraps, and a roof over her head because she was too proud to tell her that I’d lost my job, squandered my savings and could no longer afford the rent on my Fort Greene apartment.

Of course, she’d never let me forget when I’d screwed up. Grandma suffered no fools-she couldn’t give two flying you-know-what’s about feelings. Wrong is wrong. Right was right. Black was black. White was white. With her, there was no grey. To me, there was always grey. I was always looking for shortcuts.

Proverbs 25:28: “like a city whose walls are broken through is a person who lacks self-control.”

It’s the “grey” that gets you in trouble. My “grey” was/is pride. My emotions dictated every choice I’d ever made in life.

Grandma overcame personal tragedy, heartbreak and disappointment by adhering to this proverb-it was how she was able to push through to success. It was how at age 98 she’d earn her Doctorate-the first in our family to obtain the highest educational honor. A woman without a college degree-but definitely the smartest woman in the room. She had nothing to prove to anybody. She knew who she was. She was fearless.

Like an alarm clock, every morning at 5 am, I awoke to fervent praying. When Grandma prayed, she prayed. I picture her and the prophet Elijah in some serious competition when it came to asking God for favor. I remember pulling the covers over my head to drown out the weeping and wailing.

Her pleas were so desperate. So loud. The longer I live and navigate this world, I can understand the need for desperate, loud prayers.

Her prayers kept me alive all these years. If it weren’t for her faithful prayers, I’d be lying in a ditch somewhere-or worse. I understand prayer in a way that I could not have until now. I understand Grandma in a way that I didn’t until now. I’ve always loved and respected my Grandmother-I know she worked hard. I know her faith was what kept her strong and vibrant for 98 years, but the pastor at her funeral said something, which struck home: Grandma lived so long because she always had work to do. Whether she was counseling on the prayer line, serving food to the homeless, or playing Solitaire- she was never idle-not even when she was confined to her bed as a result of the stroke.

I pray for the strength she had. It shames me when I think of how easy I’ve had it. How often I complain-even with two master’s degrees. Grandma had no degrees but managed to build an empire-on her own. Oops! Sorry Grandma- I can actually hear her admonishing me-everything she did was made possible through Christ, her Lord and Savior, who gave her the strength. She prayed as though the it depended on God, but worked like it depended on her.

And here I sit, binge watching Netflix series, head in my hands, feeling sorry for myself rather than pounding the pavement or in my case, writing until my fingers fall off–doing whatever it takes. Praying. Working. There’s not enough time nor space to tell you everything I want or should, about Grandma’s life and legacy-wait for the book!

Finally, I’ll end by saying those 5 am prayers have left an indelible mark on my life. I set my alarm at the same time to continue the tradition. You taught me the importance of faith and prayer, especially when you have a family to protect, which I do. I know how hard you worked for us. Your loss has truly left a void. When you passed, my first thought was who will pray for me now? And I know what you would say… Therefore, I must go now.

There’s work to do.

'...because you're a writer, damn it! And you always will be.' Still waters run deep! Check out my musings about life, love and writing. Follow me on Twitter @reneebdaqueen, on Insta @momchairphilosopher, TikTok@reneebarrett348. My monthly podcast, "Are You For Real?! TBA so stay tuned! View all posts by momchairphilosopher

One thought on “In Memoriam…” 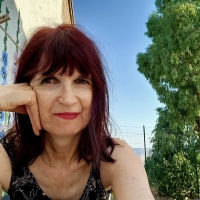 Recipes showing step by step directions with pictures and a printable recipe card.

Experience The Finest Travel, Food and Lifestyle Stories Around The World

A blog about everything and nothing

Records of the amateurish philosophic alignment to what we see, hear, feel, taste and smell

Conversations on finding and loving who I am

Let's have an open conversation about life.

Discover ©SK's 🆆🅴🅴🅺🅻🆈 🅵🅻🅰🆂🅷 🆂🅰🅻🅴🆂 on our Site | We offer unique graphics and artwork designs on T-shirts, Apparel, Mugs, Bags, Posters & Prints and much more gifts for Whole the family, our T-shirts are available in a huge variety of styles, sizes, colors and designs for all kinds of occasions.

Musings of the Mind

All book lovers are welcome!

A STRANGER IN ACCRA

A compilation of my thoughts. Making a positive impact one post at a time...

From The Darkness Into The Light

AN ARTIST IN BASILICATA, ITALY

Recipes showing step by step directions with pictures and a printable recipe card.

Experience The Finest Travel, Food and Lifestyle Stories Around The World

A blog about everything and nothing

Records of the amateurish philosophic alignment to what we see, hear, feel, taste and smell

Conversations on finding and loving who I am

Let's have an open conversation about life.

Discover ©SK's 🆆🅴🅴🅺🅻🆈 🅵🅻🅰🆂🅷 🆂🅰🅻🅴🆂 on our Site | We offer unique graphics and artwork designs on T-shirts, Apparel, Mugs, Bags, Posters & Prints and much more gifts for Whole the family, our T-shirts are available in a huge variety of styles, sizes, colors and designs for all kinds of occasions.

Musings of the Mind

All book lovers are welcome!

A STRANGER IN ACCRA

A compilation of my thoughts. Making a positive impact one post at a time...

From The Darkness Into The Light

AN ARTIST IN BASILICATA, ITALY